UCF came out the gate with an interception, Richie Grant intercepted Isaiah Green on their first possession.  On 3rd & 9 he returned an interception for a touchdown and UCF was on the board in the first 56 seconds of the game.  The next possession UCF caused a fumble on Marshall’s first play and recovered it.  UCF defense had two turnovers within 75 seconds in the game.  Greg McCrae had a 26-yard touchdown run on his first carry of the game to put UCF up 14-0.

Tre’Mon Morris Brash returned a fumble for another UCF touchdown with UCF leading 21-0 with 7 minutes remaining in the first.  Marshall would score their first touchdown when Darriel Mack Jr. threw an interception that was returned for a 75-yard touchdown. UCF would close out the first half with a field goal with a 24-7 lead.

Both teams came out in the second half putting points on the board and would combine for 39 third quarter points.  Marshall tried to make a comeback after Green threw a 70-yard touchdown to Willie Johnson on a one play drive.  They converted a two-point conversion to make it 38-22.  UCF came right back on one play when Dillion Gabriel threw a 75-yard touchdown to Marlon Williams.  UCF would go up 45-22, both teams would only score one field goal each after. 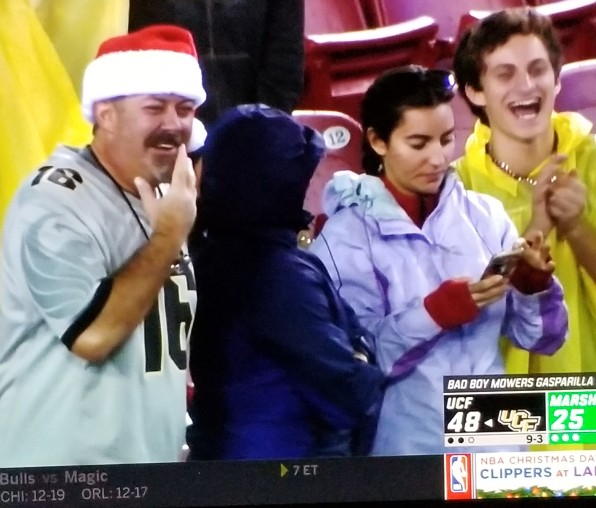 UCF finishes their season with a 10-3 record, for a team that was good enough to finish in the top 10.  With McKenzie Milton out this year, UCF had a freshman Gabriel playing quarterback this season.  I believe if Milton was healthy, UCF would have been undefeated at this point.  After winning 25 games the past two seasons, playing in two major bowl games and having enough experience to finally make the CFP.  Great win to end their season and they should finish the season ranked.