Deja Janea is from Tacoma, Washington and she was raised in Newark, Delaware. Currently she is located in Los Angeles and has been modeling for four years.  Her mission is to inspire others to follow their dreams and stay true to who they truly are.  Deja is a firm believer in God and has proof that the law of attraction works.

How does it feel to be selected as one of the Abners Angels?

Great! I’m honored for the interest.

What was your first big break in the industry?

I’m still working really hard but time was my big break lol.  Overtime, more opportunities came knocking on my door.  Working with the right photographer, such as Kin Kordell and producing great content.  That opened other doors and put me on the pay of working with brands such as Mint Swim.  I was on a billboard in Times Square for Sensationell hair (RUWA).  I was in music videos with artist such as The Weekend, Ty Dolla Sign & Fab, Migos, Lil Pump, Chris Brown and King Kombs and many more!

What inspires you as a model?

The freedom of creativity inspires me and being able to bring an idea to life in a picture. The result of hard work and dedication.  Seeing how far I’ve come from the time I started helps me keep stay inspired.  Mainly, Zendaya and Karrueche inspire me.  I love what they do and represent and I aspire to be in the position they’re in sometime soon.

What are the main challenges in modeling today?

Man, there is so many.  Not being tall enough or too thin.  I’ve experienced a racial interaction once.  It through me off but opened my eyes to what models darker than me go through, it’s sad.  There’s a lot of models these days too which can make things seem overstated and helps companies dispose of models they feel aren’t good enough but we’re all good enough! I’m not going to let the challenges distract my purpose.

What’s one of your proudest moments in your career?

My proudest moment so far was my billboard in Times Square.  I didn’t get a chance to see it in person, but seeing the video just shocked me.  It made me even more hungry.  I was shocked because I wrote down, probably in December, that I wanted a billboard in New York.  Fast forward six months later, there I was on a big digital screen in the city that never sleeps.

Which supermodels did you look up to when you first started your modeling career?

I don’t really have a supermodel I looked up to.  I watched a lot of videos about Tyra Banks, Namoni, Zendaya, Kate Moss.  I’m just influenced by women who are driven, strong and use their purpose/ platforms to help women of all ages.  Those women represented that for me.

Potatoes are my favorite!! Every kind of potato, lol.  Favorite restaurant hmmmm, I’d have to say Aeirloom in Cali! The best, healthy and organic food.

What’s something you thought you’d grow out of but haven’t?

I thought I’d grow out of being bow legged but nope, still here, lol.  Guess my family held me too much as baby.  It’s not that bad but I notice it.

What is the craziest gift you ever have received?

That’s funny, I can’t really think of anything, lol.  All I can think about is when I was little and went trick or treating, this lady gave my friends and I coupons! Lmao

What’s the scariest thing you ever done?

Went to the Willis Tower in Chicago.  It’s 12,000 feet high and 103 stories.  You stand on a glass box/ledge and you can see the whole city under your feet.

What was your worst first (and last) date?

Worst date was when a guy picked me up and had the wrong address.  He couldn’t find me and made me walk two blocks to his car, I only did it because I thought he was nice. Then we went out and he tried to get me to pay for both of our meals, even though he was the one that invited me out! I don’t mind paying for my own meal but don’t assume I’ll pay for yours! Tuh!

Soon, I’ll be hard to miss 🙂 I’ll be in big commercials, huge billboards across the world and magazines covers.  Until then, my Instagram is @DejaJanea_ and my YouTube channel is (search bar) Deja Janea https://youtu.be/fY1vNcuxeHg . 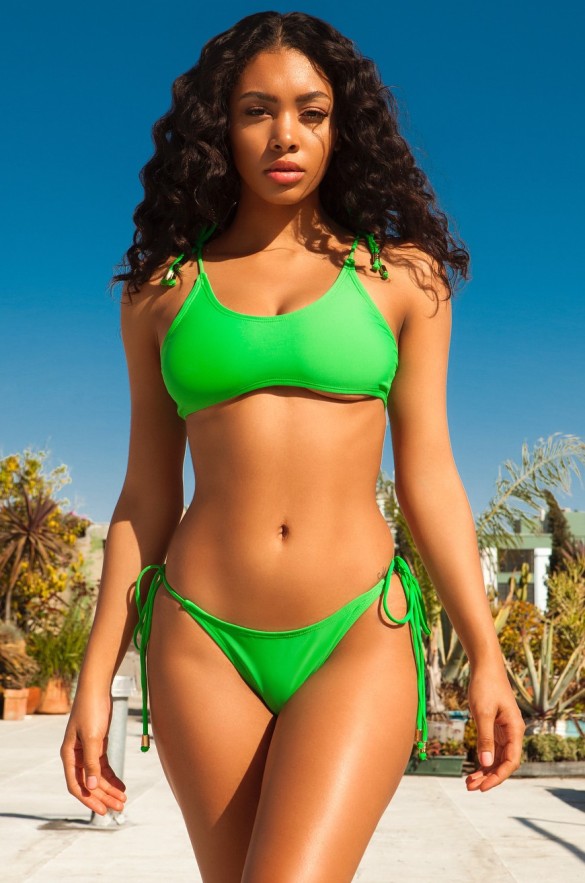